On this week’s show: 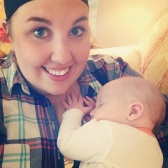 *A couple that “celebrates” their abortion? A look at love defined.
*Restoring real hope to men, women, and children who’re homeless. A feature on Hope Ministries with David Burrier.